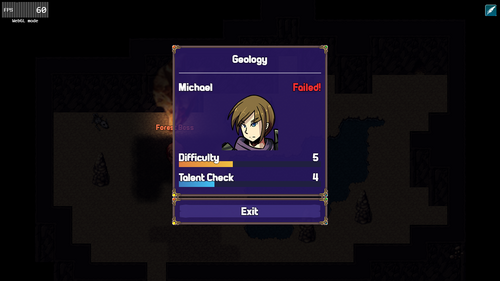 The major goal of Titan Saga is to create a story that the players can actually impact. One of the things that the D&D Skill system accomplishes is to measure the ability of a character to succeed at a task. For example, A Rogue with a high dexterity would have a bonus to a dexterity based action. Now a wizard with low dexterity would still have a chance to successful complete the action, but the Rogue’s would be much higher.

In Titan Saga, the new Talent system will accomplish this. From trade skills like Crafting and Mining to Social skills like Deception and History, and even skills like Lockpicking and Perception. Every playable character will have Talents and by specializing characters into certain Talents, you will be more likely to successfully affect the world of Titan Saga. This allows the story to have many branching options and also give realistic outcomes. Your character who has spent most social interactions being deceptive will be able to trick a guard in Act 2 while another player, who used other skills, will need to sneak into the Keep. They can still certainly try to lie to the guard but a failure is likely to lead to battle and a critical failure is likely to lead to an overwhelming battle.